Catholics, in their exercise of their citizenship, too often succumb to what the Fathers of the Second Vatican Council warned of in the “Pastoral Constitution on the Church in the Modern World” (“Gaudium et Spes”). They wrote: “This split between the faith which many profess, and their daily lives deserves to be counted among the more serious errors of our age” (Par. 43)

Faith and Life must come together for Catholics. The full Deposit of Faith must be guarded - and it must inform every area of our life, including our social and civic participation. That includes our voting.

“The social doctrine of the Church is not an intrusion into the government of individual countries. It is a question of the lay Catholic’s duty to be morally coherent, found within one’s conscience, which is one and indivisible. There cannot be two parallel lives in their existence: on the one hand, the so-called ‘spiritual life’, with its values and demands; and on the other, the so-called ‘secular’ life, that is, life in a family, at work, in social responsibilities, in the responsibilities of public life and in culture. The branch, engrafted to the vine, which is Christ, bears its fruit in every sphere of existence and activity.”

We need to fully participate in the election process, as Catholic citizens, in a manner which is morally coherent.

You’re joining our global classroom. Thousands of students from all over the world, each with their own unique story, learn at their own pace on Catholic Online School every single day.

Free Resources and tools for students, parents, and teachers. We’re working hard to ensure that Catholic Online School empowers teachers of all kinds to better understand what their children or students are up to and how best to help them.

“This will make me rethink my selections, we all need to do our homework!”

“This will make me rethink my selections, we all need to do our homework!”

“That you must participate in life activities, including politics. Through the faith that was inculcated from childhood to maturity. Without unparalleled thought.; That's is Jesus Christ our Lord. ”

“That you must participate in life activities, including politics. Through the faith that was inculcated from childhood to maturity. Without unparalleled thought.; That's is Jesus Christ our Lord. ”

Bishop Strickland was born the sixth child of Raymond and Monica Strickland on October 31, 1958. He grew up in Atlanta, Texas. The Strickland’s were founding members of St. Catherine of Sienna Church in Atlanta, Texas where he assisted as an altar server. He entered first grade in Atlanta public schools in 1965 and graduated from Atlanta High School in May of 1977.

He earned a Master of Divinity Degree in May of 1985 and was ordained to the priesthood for the Diocese of Dallas by Bishop Thomas Tschoepe at St. Monica Catholic Church in Dallas, Texas on June 1, 1985.

He was assigned as a newly-ordained priest to Immaculate Conception Parish in Tyler, Texas in June of 1985 and served as Parochial Vicar until June of 1989. Upon the erection of the Diocese of Tyler on February 24, 1987, he then joined the presbyterate of the new diocese and was named the first vocation director for the diocese in March of 1987 by Bishop Charles Herzig. He was assigned as Parochial Vicar of Sacred Heart Parish in Nacogdoches, Texas in June of 1989 and served there until October of that same year when he was assigned as pastor of St. Michael Parish in Mt. Pleasant, Texas. He served as pastor of St. Michael's until August of 1992 when he was assigned to canonical studies at the Catholic University of America by Bishop Edmond Carmody.

Strickland completed his canonical studies with a Licentiate in Canon Law in May of 1994 and was assigned by Bishop Edmond Carmody as rector of the Cathedral of the Immaculate Conception in Tyler, Texas in June of that same year. He was appointed Judicial Vicar for the Diocese of Tyler in May of 1995 and named a Prelate of Honor with the title Monsignor by His Holiness Pope John Paul II in February of 1996.

On September 29, 2012, it was announced that His Holiness Pope Benedict XVI had chosen Strickland as the fourth bishop of the Diocese of Tyler. He was ordained to the episcopacy on November 28, 2012, by His Eminence Daniel Cardinal DiNardo of Galveston-Houston with Bishop Álvaro Corrada, SJ of Mayagüez, Puerto Rico and Archbishop Michael J. Sheehan of Santa Fe assisting as co-consecrators.

Bishop of the Diocese of Tyler 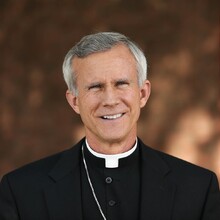